We’re Episcopalians, or as we’re called in some parts of the world, Anglicans: catholic Christians who worship God according to the tradition of the reformed Church of England, locally adapted and updated as directed by the Holy Spirit of God. (Yes, we’ve all watched Wolf Hall and we know about Henry VIII. We’ll talk about that later.)

Our community has been a thing since 1767. That’s right—before there ever was a United States of America, there was a St. Peter’s Church, meeting in a little wooden building that still stands in the middle of a cemetery just up the road from here.

The people of St. Peter’s, Tory and Patriot alike, nevertheless opened those doors to American revolutionaries and their French allies when they needed a hospital for their wounded. That’s probably why George Washington himself intervened to keep us from losing our land when the shooting was over. We’ll show you the carved initials “G.W.” in the railing upstairs. (You can decide if he slept there or not.)

And we’re still opening our doors to everybody in our “new” (1892) location, whether we agree or disagree on politics, music, or anything else. Because there’s one thing on which we do agree: Jesus is Lord. And another one: God is Love. All the rest is commentary.

We are not perfect. We fuss with each other over stupid and trivial things. For the most part, we’re over the major stuff—racism, sexism, homophobia, which Prayer Book to use—but that work is never finished anyway. We’re human beings, trying to become better human beings, with the mind and in the image of Jesus Christ, and to shed a little light in this beautiful place.

We love to eat. We love to pray. And we love to love. (Wait, wasn’t that a book?) And we’d love to have you join us this Sunday! 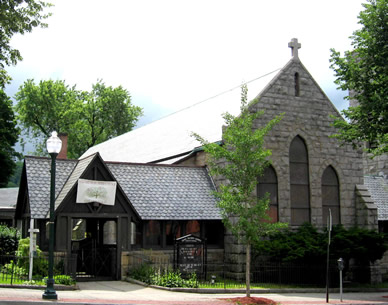 The mission of The Field Library is to inspire lifelong learning, advance knowledge, and strengthen the City…

Caring for the Hungry and Homeless of Peekskill

At Caring for the Hungry and Homeless of Peekskill (CHHOP), we believe that every person is entitle to safe…