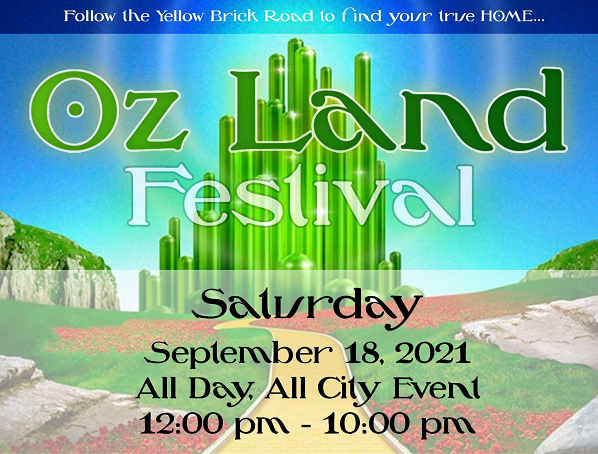 On September 18, 2021 Scarlett Antonia of Antonia Arts, Inc. will be holding a city-wide event entitled, “The OZland Festival.”  Antonia Arts is a not-for-profit creative and performing arts organization, which has been providing arts scholarships and producing theater productions in Peekskill since 2000.

The OZland Festival will be a fun, family event that is taking place from 12pm to 10pm at various locations throughout downtown Peekskill.  These locations include The Paramount Theater, Division Street, the Elks Club, and the Artist Spot at 925 South Street.

Scarlett Antonia has been orchestrating productions in Peekskill for over 20 years, and the lineup of talent on this special day will reflect that with her returning students, as well as new talent, emerging and professional.

An original show entitled “A Journey Home”, written by Scarlett Antonia, starring singer/songwriter Tayla Rees will be at the Paramount Theater.

There will also be a variety of vignettes performed by young actors on what home means to them.  Home is a prevalent theme in this day’s magical event as we all know Dorothy in the Wizard of Oz was trying to find her home.

The day will be full of a wide array of entertainment and attractions for all ages to enjoy including line dancing, singing, street vendors, and an art gallery reception. The day will end with a showing of the “Wizard of Oz” film at the Elks Club on Brown Street.

The mission behind the OZland Festival is: “To have an annual event that will bring tourists to Peekskill in support of our businesses, organizations, restaurants, history, diversity, talent, and incredible heritage.”

The inspiration behind the theme of “OZland” comes from Frank L. Baum, who attended Peekskill military academy as a youth. He was the writer of the Great American myth, “The Wizard of Oz” with its’ first stage show coming from New York City to The Palace Theater in Peekskill in 1904.  There is a debate as to whether or not the original yellow brick road actually exists in Peekskill.  However, Peekskill does have a multitude of yellow brick roads that are often seen under the pavement if you look hard enough.

Come join us on this magical journey as we follow the Yellow Brick Road to Peekskill, the Emerald City of OZland.

The tickets to see the show at the Paramount Theater will be $15 for general admission and $10 for students and seniors.  All other entertainment is free of charge.  For more information, please go to Antoniaarts.Org